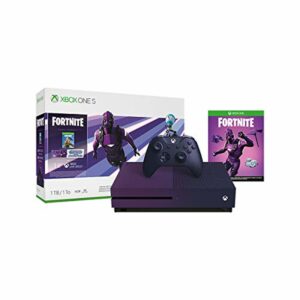 Join the worldwide Fortnite phenomenon with the Xbox One S Fortnite Battle Royale Special Edition Bundle and get ready to battle to be the last one standing.

This bundle includes a gradient purple Xbox One S console, a purple Xbox Wireless Controller, Dark Vertex Cosmetic Set which includes a Legendary Outfit, an Epic Glider, a Rare Pick Axe. Plus, you can purchase additional cosmetic items or a Battle Pass using 2000 included V-Bucks. Fortnite Battle Royale is the free-to-play 100-player PVP mode where you fight to the be the last one standing. Jump into intense PVP combat or play mini-games in Fortnite Creative, all on Xbox Live, the fastest, most reliable gaming network.

Whether you’re playing with instant access to over 100 games on the included 1-Month Xbox Game Pass trial, watching 4K movies, or streaming gameplay, there’s never been a better time to game with Xbox One. (Game requires Xbox Live Gold, subscription sold separately. Unlock the Dark Vertex Cosmetic Set in Battle Royale and Creative modes only. Bundle doesn’t include access to Save the World mode.)

Ready to ship in 1-3 business days

There are no reviews yet.

Only logged in customers who have purchased this product may leave a review.